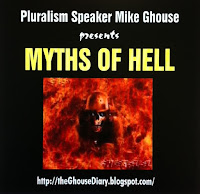 Hell is not dead, nor will it die but dying it is.
Texas Faith is a weekly column at Dallas Morning News where a dozen religious panelists opine on issues facing the nation. I am blessed to be one sharing a pluralistic perspective on issues of the day. No group has a monopoly on good, bad and ugly things of life, we are equally responsible for creating a cohesive society where you and I can live without apprehension of the other and live the life and let others live theirs.  This weeks question is responded by 14 Panelists in the following link: http://religionblog.dallasnews.com/archives/2011/04/texas-faith-is-hell-dead.html
Here is my take
Hell is not dead, nor will it die but dying it is.
Hell is different things to different people; to some it is a real thing where one burns on renewable embers for eternity. At the other end of the spectrum it is pure anguish to some, and yet to some it ain’t there.
But one thing is certain, an increasing number of people believe hell is a thing of the past used as a deterrent to prevent wrong doing.  The latest research from Barna Associates shows that only 32 percent of adults see hell as, "an actual place of torment and suffering where people's souls go after death.”
"I don't think fear, as a tactic, really moves people toward faith these days," Pastor Bill Hybels said. "So, tactically, I think there are better ways to interest the uninterested in the claims of Jesus Christ."  Pope Benedict reiterates, "Jesus came to tell us everyone is wanted in paradise, and that hell, about which little gets said today, exists and is eternal for those who shut their hearts to His love."
People simply don't want to hear about Hell any more, they have enough of it in their own lives to listen to another one.
They are searching for a door to escape momentarily and prefer attending a Church, Mosque, Synagogue, or other place of worship to hear about peace and hope, where no one is apprehensive of the other under the big tent. This phenomenon is part of the people regardless of their religion, some Muslims go to a Mosque at the tail end of a sermon to catch up with the prayers and avoid hearing about hell.
Author Theologian RC Sproul writes, "Many evangelical pastors have bristled at the thought of being labeled a "fire and brimstone" preacher and turned to a kinder, gentler approach.
Joel Osteen has captured that market well; he understands their needs and consistently delivers a message of hope to over 30,000 a week including me.  People are also turning to silent mediation centers to get away from the hell pounding in the sanctuaries.
An empirical research is warranted to determine a correlation between decline in church attendance and the sermons of hell, hate and fear.
The hell is indeed dying, and the individuals are discovering the myths of Santa Claus and the myths of Hell.
Bottom Line:
Here is a possibility you may want to ponder. Every item of the universe, life or matter is created to seek its own balance for survival. Matter is programmed to seek its own balance, where as humans are not, they have the free will to find that elusive balance through a variety of religious, psychological, social or common sense guidance.
In life when someone wrongs you, you cry out loud seeking justice in a variety of formats; it is indeed a balance seeking mechanism. Religions offer the scenario of hell or reincarnations in lower forms as a punishment; it gives hope to the victims of oppression that no one will go scot free and yet God offers an alternative plan; forgiveness. It is Central to the teachings of Jesus and found in every religious and spiritual tradition. In Islam, Quraan Guides one with this thought; the one God loves most is the one who forgives.
# #
Mike Ghouse, President of America Together foundation is committed to building cohesive societies and offers pluralistic solutions on issues of the day to the media and the public. He is available to speak at your place of worship, campus, work, seminars and conferences. He is a speaker thinker and a writer on the topics of pluralism, cohesive societies, Islam, interfaith, and Peace. Mike's work is reflected in 4 websites and 27 Blogs at http://www.mikeghouse.net/
# # #
Profiles :http://pluralismspeaker.blogspot.com/
Posted by Mike Ghouse at 2:16 PM