Obama’s support for Saudi Arabia to bomb Yemen, will not quell the dissidents, indeed, it will do the opposite. Saudi Monarchs should have played safe, and played the role of the Guardians of their neighbors rather than taking “either with us or against us approaches”.

Obama need to quit supporting Saudi aggression, it is not good for them and us in the long haul.

Saudi Monarchs have begun the process of digging their own graves… give it a few more years. If the US does not play it right and sides with the monarchs against the average men and women, they will have a rebellion on their hand, the likes of Iran in 1979.

Obama followed a sane foreign policy; he understood that the lasting relationships exist between people and people, and not between individuals or un-representative governments. He demonstrated that superbly by calling Mubarak to step down and siding with the people of Egypt. He is doing fine on Iran policy, and has bungled up on policy with Israel and Saudi Arabia.

Unfortunately, the Republican Party has given refuge to all the damned war-mongers, who are craving to have actions – bombing, killing, subduing and oppressing others. God has simply taken out the “peace gene” from them.    I would like to hear “peace” “reconciliation” and “cohesive societies” come out of the mouths of Republicans and change their perceptions.  I know the majority of Republicans are peace makers, but their silence is taken as support by the war mongers among them. It is time for the Republicans to speak up.

Back to Dallas from a conference in Aligarh India

I am back in town now.

Briefly
1. I spoke in the plenary as well as the closing session at Aligarh Muslim University's conference on, "Intellectual Crises of the Muslim Ummah: Rethinking Traditional Solutions" between April 6-7, 2015. It was good to chair two panels and make presentations. Count on AMU to be in the forefront of necessary reforms in creating cohesive societies.

My talk on "Engagement with Civil society" and focusing on "the present rather than hereafter (Akhira)" went very well. More at: http://www.worldmuslimcongress.blogspot.com/2015/04/congratulations-to-aligarh-muslim.html

AMU They had several bill boards in town and on the campus... it was a humbling experience to see them include me among the top scholars. 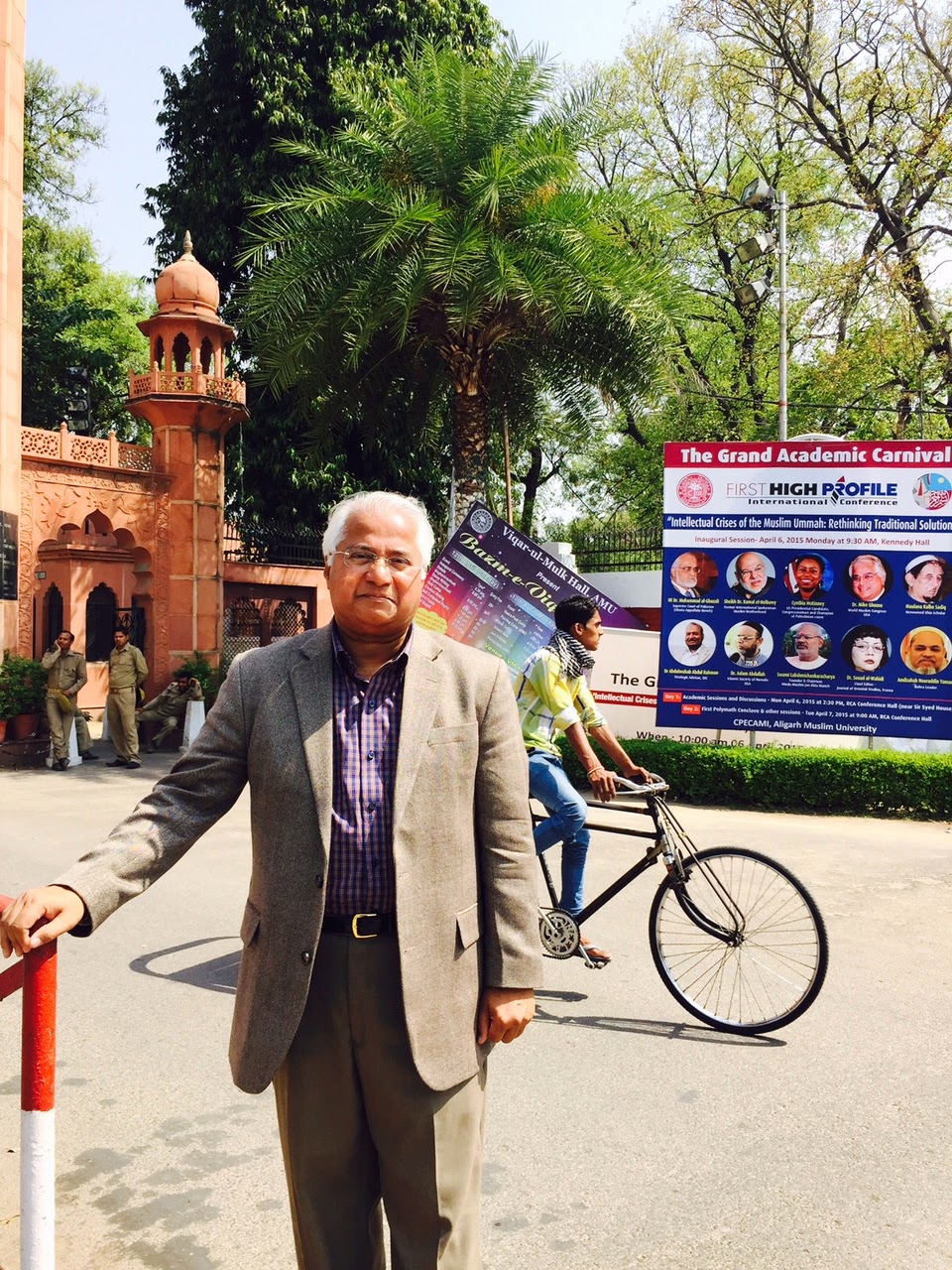 2. Met with General Zameer Uddin Shah, Vice-Chancellor of AMU and was pleased to see his commitment and vision. He is determined to resuscitate Sir Syed Ahmed Khan's Vision. I am sure, he and the Pro-VC Dr. Ali will make AMU, one of the top ten universities in India, and the Islamic world.

3. AMU is offering bridge courses to students out of Madrasas and getting them to see the larger world of Aalameen and presenting the inclusive Islam rather than a narrow version of it.

4. Gave a talk at Asim Siddqui Memorial college in Badaun with the greetings from Bahai to Zoroastrian and every one - spoke about the idea of Vasudhaiva Kutumbukum in dharmic and abrahamic traditions. If you visit UP, I would suggest you to visit this college, what an inspiration to see an India in making.

5. Met with Girish Karnad (no introduction is needed) and talked to him about appearing on a Cameo role in the film "sacred"  we are making, he is interested in it for its message and the reform it brings. No commitment yet.

6. We hope to make a documentary on Tippu Sultan, the secular ruler of an Indian State. I met with several researchers, prominent among them is Dr. Range Gowda (not related to Deve Gowda). He has written two books on Tipu Sultan  and has solid documentation on his credentials.

Girish Karnad is also interested in it, and he has written plays about it and wrote the book "The Dreams of Tipu Sultan" The book takes you back to that era as the fall of Mysore took place.

It is such a joy to hear so many positive things from fellow Indians and Kannadigas, not only they are writing but actively seeking a prominent place for Tippu. Several years ago, Bangalore was ready to install statutes of Tippu Sultan, the Muslim community opposed it, what a shame - to deny our own history and contribution through symbols.

Dr. Shakeel Samdani of AMU is also working on keeping Tipu Sultan's contribution alive and has gotten a designation to house Tipu Library at AMU. He needs all the support he can.

7. Held several mini discussion groups at AMU, I have come out very optimistic about India and Indian Muslim's efforts to make a better India.

8. Spoke with the Human rights group and talked about my upcoming book about human rights.
9. Indians in India are far more pluralistic than some of the Indians in America.

10. I hope to work with a few scholars from AMU in taking on the role of civic engagement and dialogue with the likes of Subrmanian Swamy, Taslima Nasreen and others who throw things at every one. It is time for all of us to focus on India's development rather than endless bickering.


11. Spoke at the NRI Film producers and actors guild in New York, a new organization with aa growing membership. Thanks to Professor Saluja.

ELEBRATIONS | Easter, Mahavir Jayanthi, Hanuman Jayanti
Every human and every religious group celebrates some thing or the other in their own way, each one is different, but the essence is same; celebrations. Details in the links.
GOOD FRIDAY|  HAPPY EASTER | MUSLIM OBSERVANCE
http://theghousediary.blogspot.com/2013/03/what-made-me-go-to-catholic-church.html 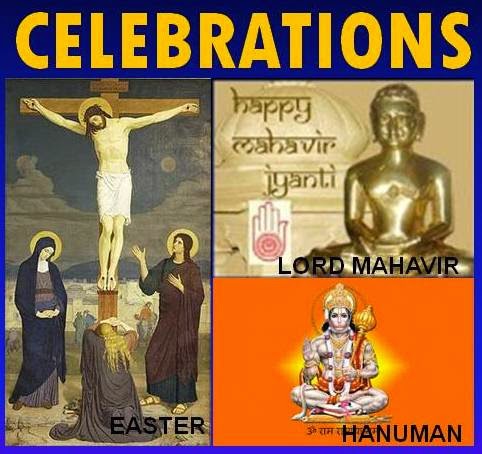