Swami Vivekananda gave a new meaning to the Hindu philosophy of tolerance. As I was reading the article about Swami Vivekananda, several paragraphs struck me and I am inspired to write the following article.
When Swamiji talks about, “The Christian is not to become a Hindu or a Buddhist,” He was talking about religion is a pathway to spirituality. I had just responded to Mr. Yogi Sikand on an article about Dawah work in Islam by Maulana Wahiduddin, and Missionary work in Christianity.
In my note, I was hoping to read what the Dawah (an invitation to convert) was for? Is it to make one a Muslim or to guide the person to become the righteous one?  Same question goes to Christianity, Sikh, Baha’i, Hindu and other traditions.
When Jesus said, “follow me”, said, “Surrender to me” and Allah says, “submit to my will”, the call was to follow God’s law of nature; to live cohesively and in harmony. It is about bringing a balance and equilibrium to everything we do. Balance is sustainable and extremity is not.
Personally I value every religion, and do not consider the need for any one to change his or her faith unless he or she finds solace in a different faith other than the one s/he is accustomed to. Every faith does what it is suppose to do to the believer; bring peace of mind.  No one should compel one to convert or prevent one from converting, let one choose what one believes to bring tranquility to him and harmony with others.   Let it be an individual’s choice.  What difference does it make to you if I eat different food, wear different clothes and speak a different language?
Swamiji touches on diversity, indeed, because we are diverse we have survived if we were all one, we could have been wiped out with one single disease. Each one of us is endowed with a different thumb print, DNA, eye print etc, so let’s have a different faith as well. To repeat his words, “The Christian is not to become a Hindu or a Buddhist,”
Conversion assumes a deficiency in the other faith and that is sheer arrogance. However, I would guide one to be a better Hindu, Jew, Christian, Muslim and ultimately a better human, which is the essence of every religion.  Mahatma Gandhi had emphasized the same thought and Prophet Muhammad’s first model of education was to be truthful, trustworthy and caring and he was called Amin by the people around him.  Jesus embraced every one without flinching, and accepted the otherness of other, in fact he said let’s condemn the sin but not sinner, that was the ultimate in inclusion or I call it Pluralism.
The other thought that really touched me was, “Swamiji was in favour of harmony among religious beliefs and against one religion for all.”
Indeed the Foundation for Pluralism is about that, and the Parliament of Worlds Religion has set the lofty but simple goals such as: harmony rather than unity, convergence of purpose rather than consensus of belief and facilitation rather than structuring.
Those of us who feel insecure about the interfaith movement and fear losing our identity or diluting it, please be assured that the goal of the Parliament is NOT to UNITE religions, but to facilitate a platform to learn about the others first hand and work together for the common good of mankind. 90% of religion is about doing common good; only 10% of it is rituals that give it its own uniqueness. 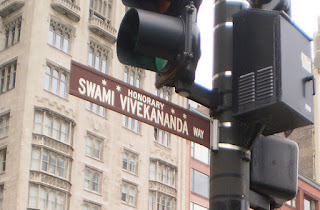 There is no proselytization element in any of the events the Parliament facilitates. You may love the theme in , “hearing each other and healing the earth”. Indeed, that is the need of the day; hearing each other first hand.
The City of has honored the Swami by naming a street after him, and now get ready to honor the Swami again in 2014 at the Parliament of World’s religions in Brussels. Save the monies and get ready. Insha Allah, God willing, see you there with a topic on Swami Vivekananda.
# # #
Mike Ghouse, President of America Together foundation is committed to building cohesive societies and offers pluralistic solutions on issues of the day, and is available to speak at your place of worship, work or in seminars and conferences.

Through the Foundation for Pluralism, Mike champions the idea of co-existence through respecting and accepting the otherness of other, and is committed to nurturing the pluralistic ideals embedded in Islam through the World Muslim Congress.  He is a speaker thinker and a writer on the topics of pluralism, cohesive societies, Islam, interfaith, and Peace. His work is reflected in 4 website's and 27 Blogs at http://www.mikeghouse.net/
# # #
Reference: http://www.thehindu.com/arts/history-and-culture/article1587374.ece
Posted by Mike Ghouse at 12:47 AM