Miko Peled is son of Israel’s General Matti Peled, a champion of Palestinian rights. Those of you who genuinely seek to understand the complexity of Israel Palestine issue, I recommend this video on YouTube Video 1:08:31 Minutes. 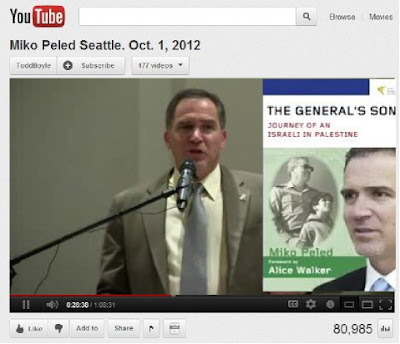 The Palestinian right is no different than the Israeli right. They constantly blame each other and are eager to show off their muscle power, without giving a crap about long term security for Israel and justice for Palestinians, so their children can live in a better world.

To be a peace maker is to acknowledge the prejudices and conflicts, know that a few individuals drive the agenda for the whole populace, and it is usually not the will of the people. We need to hold the temptation to justify the actions of one over the other.

To be a peacemaker, we need to be free from bias, hate and ill-will, and we need to be at peace with ourselves to find peace for others.

Miko touches on Anti-Semitism at the tail end of the video. It has been my experience as well, and I will include that experience in my upcoming book, so we all can learn the little things that can cause us to fall and avoid it.  I thank God for putting me through the tests of withstanding endless harassment through emails, phone calls, and unleashing a few tormentors to exasperate me on social media. The right-wingers wanted to push me to say stupid things, so they can nail me as an “anti-Semite” and bring an end to my little peacemaking efforts. They failed miserably, I am no anti-Semite, and prejudice is not in my blood stream. Most of you may not experience this, as you have not dealt with deeper issues beyond hello, how are you.  It’s just not the right wing Jews, the right wing Muslims have said ugly things to me for commemorating the annual Holocaust event in Dallas, a few even called me that I will not be a Muslim. I am sure most of the peacemakers out there, regardless of their religious affiliations have experienced this. We all can share and learn to stay firm and not be prejudiced, for our own heart.

I look up to Muhammad, Jesus, Gandhi, Moses, Buddha, Krishna, Nanak, MLK and those guys, who are my role models. Nothing they did was for their gain; it was all for the benefit of humanity. Likewise, I have nothing to gain from anything I do, zip, nada, nothing.  I just wish to see people get along and willing to bear some abuse and humiliation in the process for the common good. This paragraph is for Miko, and all of you out there who are unselfishly serving humanity without discrimination. Keep it doing, it is the right thing to do.

Miko Peled’s presentation is fairly identical to my understanding. We have used a similar language with one exception; separating the right wingers on Jewish and Muslim side from the common people.  He speaks clearly and I relate with him, there is no malice or hatred in his language but facts. Indeed, he is a true representation of what Judaism is all about; fixing the world to be just and I hope to be a true representation of Islam, to be a just and fair with my own short comings.
At this time, I do not support the idea of one state for Israelis and Palestinians. Although I come from a nation that was split on religious lines, a major geopolitical mistake of India and Pakistan,   as mentioned in the video and the facts out there - the Jewish and Muslim children are indoctrinated that it is ok to kill the others and both invoke religion to suit their right wing agenda. No religion puts life above religion, particularly these two; Judaism and Islam, yet they abuse their religion, enough of us need to speak out against Imams and Rabbis abusing and misquoting religion. Once the two states operate, the focus ought to be education and bring a new generation without hate, then they can form a confederation along the lines recommended in Israel Palestine confederation. At the end of the day, we all need to be fed and live a normal life where we don’t have to live in apprehension or fear of the other.
Please watch the following video and share, this is one of the best things you can do. I will share the other perspective as well. Hold your judgment; until you hear both sides, I will post the other video in a few days.
......

. .........
Mike Ghouse is a speaker, thinker and a writer on pluralism, politics, peace making, foreign policy, Islam, Israel, India, Pakistan, interfaith, and cohesion at work place or social settings. He is committed to building a Cohesive America and offers pluralistic solutions on issues of the day at www.TheGhousediary.com. Mike has a strong presence on national local TV, Radio and Print Media, and is a frequent guest on Sean Hannity show on Fox TV, and a commentator on national radio networks, he contributes weekly to the Texas Faith Column at Dallas Morning News, fortnightly at Huffington post, and several other periodicals across the world. His personal site www.MikeGhouse.net indexes everything you want to know about him.
Posted by Mike Ghouse at 7:34 PM