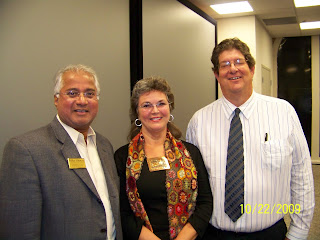 Full lecture will be posted at http://www.holocaustandgenocides.com/ blog along with a few pictures I took at the Dallas Holocaust Museum today.

A few key points that jump at me are;

- Aba Eban, once the Foriegn Minister of Israel and a staff member of David Ben Gurion shared the story about the King of Thailand congratulating the birth of a new nation and wanted to present two Elephants - apparently Ben Gurion was not happy and told Eban what he was going to do with the Elephant and told him reject the offer, so Aba Eban diplomatically wrote to the Thai King that we do not accept any animal that eats a lot. Elly was connecting that story with the West Bank, which he did not want to keep as it was an Elephant to them.

- The 1973 War was a turning point in the history of the left and right of Israel, they came together after the Yom Kippur war and realized the need to teach about Holocaust. Germany learned about the word Holocaust for the first time in late 70's.

- The teaching of Holocauast in Israel began in the early 70's

- Jimmy Carter initiated or created a commision to build the Holocaust Museum on the Mall at DC at the 30th Anniversary of liberation of Auschwitz in 1978.

- the 1967 war changed the psyche of Jews for the first time in History, they were no longer a passive people, but the one with muscle with the victory of the six day war.

- 1952 Ben Gurion apparently said, if he had a choice of human rights and security of Israel, he would take the security over human rights. This is quite interesting, I have written extensively about Israel's security needs at http://israel-palestine-dialogue.blogspot.com/ but was reinforced today about the security being the driving reason for their existence. Elly did touch on the human rights issue from the left and the security obsession of the right.

- Israel claimed to be the sole heir for the Jews who dies in Holocaust and Germany repatriated funds close to $25 Billion, that amounted to nearly 87% of Israels GNP in 1956.

- Poland was Po-lein for Jewish people, meaning live here. The Jews were invited to Poland to be the middle class in the 11th century, to manage businessess and be a conduit with the peasants.

- 3 Millions Jews were killed in Poland alone, where the majority of Jews lived.

- I spoke about the Muslim initiative to build bridges between communities, to be with Jews in their suffering and to share their grief. We are all in it together and Jews should not be alone. I hope in the next few years, people learn about Holocaust, Genocides and Massacres and take steps to prevent it from happening.