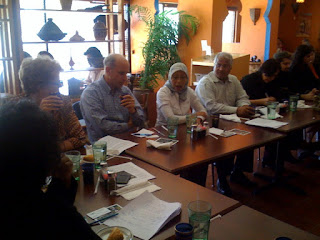 The Dallas Morning news editors and staff Members met with the Muslim community members to understand the issues of the community in a series about different communities.

Diane Solis and Mike Ghouse led to the Irving location and invited about 20 members from the community representing a broad spectrum of individual Muslims and the Imam, including ten members of their staff.

Their initiative must be applauded as it brought hitherto un-discussed and un-resolved issues to the fore. I will be writing the key points and update it later this week.

• Failure of reporting critical issues
• Why do we have to condemn terrorism – we didn't do it
• Individual responsibility - for individual acts
• Stereo typing
• Islamic schools for Children vs. Public schools
• How are the kids faring
• Critical thinking – is this specific to Muslims or is too vague

Dallas news is appreciated for making the efforts to know the community, and for expressing the desire to be objective.

In September Lori Stahl of Dallas Morning news wrote about the interfaith meeting held at Irving Mosque and immediately it was attacked by the Neocons, my comments set a new tone of dialogue; of the 62 some comments, nearly half of them were my responses, and as a community, we appreciate the Morning news for allowing the links in the comments to address the issues raised.

We also appreciate the News for dropping the prefixes and suffixes with the word Islam or Muslim in their editorials and some of the opinions. It is breath of fresh air not to place the blame on religion, but rather the culprits.

The issue of anonymity of the comments was raised and Leona Allen mentioned that it has been under discussion. Having to register with real verifiable names cuts down the hate comments, as accountability is presumed from it.

We hope the Morning news considers the following;

1. Educating the public over the long haul that individuals are to be blamed for their criminal acts and not their parents, siblings, kids, ethnicity, race, religion or nationality.

2. When reporting a crime, one must Google and find out if this crime is specific to the community or it a common issue with humanity. If a bad father kills his daughter for not wearing the Hijab, it would make sense to see how many fathers on that day or week have killed their daughters -is the issue disobedience from father’s point of view or the religion? Critical thinking is a must to prevent stereotyping and saving the misery of blaming and hating others.

3. A suggestion was made that only a certain people are to be listed as contacts who can speak about Islam. That is a naive and undemocratic thought; for every three Muslims there are five opinions and every Muslim should speak about his or her religion, let's not define the religion from one point of view. Let the media be free to contact whom they wish.

4. If an issue erupts elsewhere in the world, the assumption that Muslims would be speaking for others is ridiculous; indeed, it should be looked as we differ as Republicans and Democrats on any given issue.

5. Muslims are as sick of robbery, theft, arson, drungs, gangs, violence,rapes, murders or terrorism as any one else is, to think otherwise is dumb.

I urge the other attendees to write their notes in the comments section, I am sure I have missed a lot of items, please complete it. This is not an article; it is just my unformatted note.

The event was capped off with a comment full of wisdom from Imam Zia Shaikh - he talked about the emphasis on education in Islam. The very first word revealed to the prophet was IQRA, read and recite, and following that several words are about education and learning.