Israel cared the Arab Child; the Palestinian Mom wants him to be a terrorist.

I watched the subject video, and observed several minutes of silence to absorb the pain of the Palestinian woman in the 7 minutes video, and it took me nearly an hour to gather myself to write about it, as I promised my friend Paul Goldstein, that I will write my commentary about it. I hope my Jewish friends see another point of view.
Israel cared the Arab Child; the Palestinian Mom wants him to be a terrorist. https://www.youtube.com/watch?v=zKtWPMW9PSA 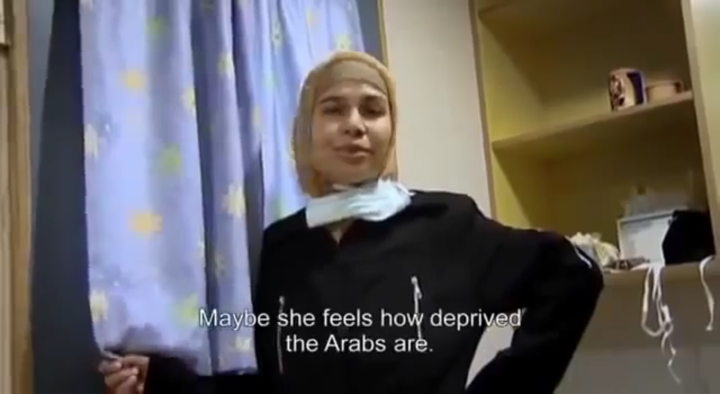 My only hope is for us to understand each other, and go beyond the words we hear.

I am quoting a scene from my article that has been very influential in my outlook at the down and depressed. I am making one of the most important points of my life about this woman’s attitude and hope and pray that you get to see that point.

“Holocaust and the Muslim guy” at Huffington posthttp://www.huffingtonpost.com/mike-ghouse/holocaust-and-the-muslim-_b_4629509.html
When I was ten years old, I read just about every book my mother read. She was indeed a voracious reader on religion and social sciences; however, I was banned from reading certain books, and one of them was "Eichmann 60 lakh Yahudiyon ka Katil" in Urdu language. That is Eichmann, the killer of 6 Million Jews. My mother insisted that I was a kid and I should not read the book, she was protective of her child. However, I was able to sneak in and see a few horrible pictures which had shut me down for the next 44 years of my life. 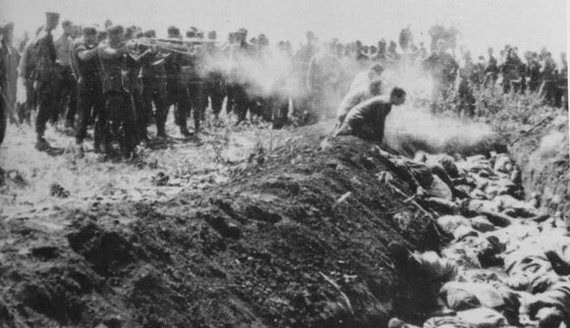 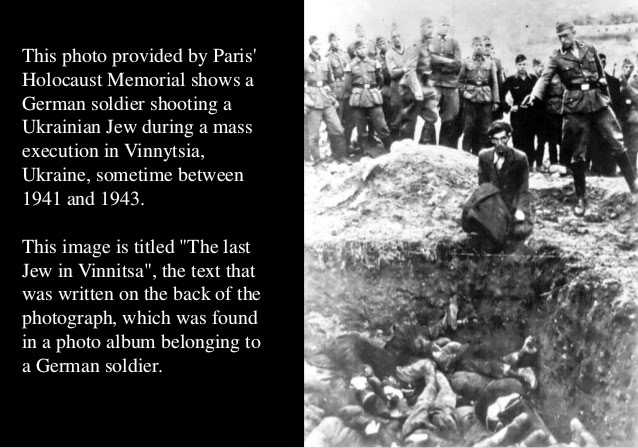 The picture (not this picture) continues to influence me; it is about betrayal of a people. A group of Jews were shoved in front of a ditch and then were shot into the pit. The looks of helplessness on their faces, as if looking at me and saying, "you are not going to do anything about it?" They were not complaining, but with all humility endured the betrayal from the entire world, it has been a difficult picture for me.
For the next 44 years of my life, I was not able to see the WWII movies with scenes from holocaust on the screen. I would turn the TV off and go into silence for a while, just could not get over the idea how people can do that to other people. There was fear in me, fear to witness that betrayal.

They never begged any one to save their life and just stared into the spaces even without complaining. I am sure the lost faith in God as well. I have held them in very high esteem for the dignified death they faced.

You know the story of Masada; they would rather die than surrender and get humiliated. Did they care what the world thought of them? There are innumerable examples of these acts of dignity.

In my college days, I shared my notes with a few friends to copy the answers on their exam papers, I was caught red handed and was taken to the principal’s office.  My “friends” did not even bother to stop by and ask about me. That betrayal and humility reminded me of the betrayal, the Jews felt in front of that ditch.

Paul, that image strengthens my commitment to human rights. I have lost many friends for my stand, and a lot of income, but I am willing to lose it all but will not back out from speaking for the rights of people. I may be one of the dignified martyrs of Masada being reincarnated.  By the way, those of you who don’t know me, I have stood up for all people with no exception including Jews -http://standingupforothers.blogspot.com/2012/02/standing-up-with-jews.html

This lady’s assertion that “death is normal” that “she will send her child back again as a suicide bomber” “death does not frighten us” enlivened that image of Jews at the ditch. She may have been the soul from Masada.

What have we done as a civilized society to get her to that point? It is the hopelessness of living a normal life.  I saw so much pain in her; she did not see any point in sharing further, what for? Instead of understanding her, we are going after religion, easy way out to blame someone and running away from the responsibility.

She had given up on you and I, she has given up on Palestinians, Jews, Americans and the world, shame on us.  I can forgive those “few” Israelis who are in pain themselves and want to inflict pain on others as if it will relieve them.

I do not like suicide bombers or any one who destroys life of others, if they claim to do it in the name of religion, it is merely an excuse that we should not be gullible to buy. Islam forbids suicide and killing others unless it is in self defense.

I am not supporting this woman's attitude either, all I am doing is seeing her point of view to learn and formulate policies to alleviate the root cause, if we can.

I am ashamed of me, you and others, and the world at large whose prejudice against Palestinians. Perhaps justifiable for their rocket attacks, suicide bombing and biased behavior – even though they have endured living in humility for 30 years without terrorism, the world did not care and did not do a thing about them. But when they resorted to terrorism in 1971, we blamed them and attempted to annihilate them.  It is as if telling the humiliated woman who just got raped, that she deserved it.

Our formulated bias has stripped a sense of justice in us, and that is not healthy for a normal society.  If we justify one prejudice, we are approving other prejudices against us.  It is time to be human and don’t push others to this point.

Please enlighten me otherwise.
Thank you