The LGBT Panel was organized by Dr. Mark Vosovik, head of the LGBT studies at University of North Texas in Denton on Tuesday, February 26, 2013 between 6:30 and 9:30 PM.

The panlelist were listed as follows:

Rev. Jo Hudson was the only member on the panel representing the LGBT community, the rest were Non-LGBT members of the community.


The program was videotaped, so you can hear the whole truth and nothing but the truth. Meanwhile, the program entailed each panelist speaking for 15 minutes about who they were, their stand on LGBT, the scriptural stand, and the future of the societies followed by Questions from the audience.

The program was satisfying in the context, every one was comfortable with their take, and fortunately none of the panelists were biased towards Gay and Lesbians. 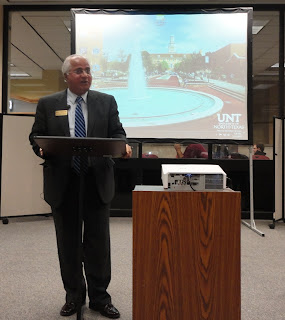 This is my 2nd panel discussion on the issue. There is a need to understand the wisdom of the compassionate creator than the tyrant God we make him out to be. What the scriptures command us to do is to respect the sanctity of life that God gave us all. In a smaller pond, God is smaller and in the ocean, he is boundless, it is up to us how we see him, her or it.

Most Muslims that I know are like myself, however my acceptance of LGBT as a normal expression of sexuality is not shared by most Muslims, just as the Majoritarian views of Christians and Jews.

As Muslims we cannot shut ourselves out of the society; we need to be a part of it. If our youth aspire to lead the nation in the future, we had better learn about our society, rather than earning the label of a bigot like Santorum, Cain, Perry, Huckabee or Bachman.  Please note that I am a Republican myself, a moderate one driven by reason and rationality.

I am also a moderate Muslim driven by common sense. I was born and raised as a Muslim and chose to become an Atheist for nearly 30 years. In the late nineties, I was flipping through the pages of Bhagvad Gita, as I did with all the holy books, and got hit by a verse, " finding the truth is one's own responsibility". Then I was on a journey to find the truth, it meant purging all the positives and negatives I had learnt about Islam, and starting all over with skepticism. Nothing to me in life is beyond question. So I became a Muslim just around 9/11, thanks to Bhagvad Gita's wisdom, Karen Armstrong books and a few other incidents. I chose Islam not because it is superior to any faith, but because I was familiar with it and took the time to critically examine it,  and its pluralism aspect appealed to me. I could have been a Hindu, Buddhist, Christian or a Jew, all are valid paths to me.


God is nothing but a system that binds the universe together and keeps it functioning with built-in anomalies like Tsunamis and meteorites and collusion.

There was a time people were killed for saying earth was round, treating a dying person with medicine was a sin.... we have come a long ways and we will do so with the GLBT acceptance.

113 Chapters of the Quran begin with the words God is merciful and Kind, these are the most recited words- Meaning, that is the highest value we can place on this energy. Like a mother, he has allowance for all the things that we mess up - the entire world is created in a self balancing system.. if we mess it up, we are responsible for it. Messing up equates to disturbing the balance - like stealing, murdering or raping against free will.

Did you see the recent picture - a mother dog brought 12 puppies from a house on fire, each one, risking her life. God is like that...because we are his creation. OK, take God as the source of creation, or the cause of the big bang or cause of that amoeba's existence.
Humans are born with a free will and there should not be any compulsion on any one to believe otherwise.


Mike Ghouse is a speaker, thinker and a writer on pluralism, politics, peace, Islam, Israel,India, interfaith, and cohesion at work place. He is committed to building a Cohesive Americaand offers pluralistic solutions on issues of the day at www.TheGhousediary.com. He believes in Standing up for others and has done that throughout his life as an activist. Mike has a presence on national and local TV, Radio and Print Media. He is a frequent guest onSean Hannity show on Fox TV, and a commentator on national radio networks, he contributes weekly to the Texas Faith Column at Dallas Morning News; fortnightly atHuffington post; and several other periodicals across the world. His personal sitewww.MikeGhouse.net indexes all his work through many links.