Gov. Christie back off on women's condescending issues, Romney-Ryan are not worth standing up for. 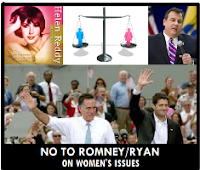 Loudmouth Christie needs to back off on women’s issue, unless the radical Republicans un-Talibanize themselves, if not he is doomed for embarrassment.

Christie is a rare Republican I agree with frequently, however, he is twisting the message and is being condescending to women.

What women want is for men to mind their own damned business, and not mess with their vagina’s, choice to abort the babies in dire necessity, marry a female if they want to, get paid equitably, not get legitimately raped, and be the clergy of any church, President of the United States or anything they want without anyone having a second thought that she is a woman.

Christie is right about not condescending to women, and I am with him, but we are lone voices in the madness of the right wingers among us Republicans. Women should seriously consider voting for the Republicans unless they back off in usurping women’s rights.

The Republican Party can discount looney Huckabee for backing another looney Akin, but what happens to the hens that will be guarded by Fox Ryan?

Does Ryan have any moral moorings to stand by his beliefs? He was against abortion in any case incest or rape, he co-sponsored that bill with Todd Akin, and now he is trying to wiggle out of it. God forbid, should something happen to Romney he will be the President and he wants to pass the buck to Romney? Congressman Ryan, have the audacity to be a Reaganite, the buck stops with you.

Governor Christie before you open your big mouth, please fix the loose mouth Republicans among us who are on a different drum beat. You don’t need to stick your neck, and be embarrassed with the Party’s stand. The leadership in Republican Party does not get it; they are driven by radicals faking in the guise of conservatism, they want to “impose” their will on America, like the Talibans in Afghanistan. Thanks to the moderate Republicans, who dumped some of them like Santorum, Gingrich, Cain and Bachman, more dumping is warranted.

Republican platform on women is not acceptable and shamefully we will lose the majority in the house if we don’t get our act together. Save the majority, and save the nation by keeping checks and balances intact, let go of Romney-Ryan, they are not worth standing up for.

MikeGhouse is committed to building a Cohesive America and offers pluralistic solutions on issues of the day. He is a professional speaker, thinker and a writer on pluralism, politics, civic affairs, Islam, India, Israel, peace and justice. Mike is a frequent guest on Sean Hannity show on Fox TV, and a commentator on national radio networks, he contributes weekly to the Texas Faith Column at Dallas Morning News and regularly at Huffington post, and several other periodicals across the world. The blog www.TheGhousediary.comis updated daily.
Posted by Mike Ghouse at 1:00 PM