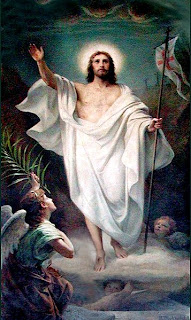 Easter is a celebration of Jesus Christ's resurrection on the third day after his crucifixion; it is Christianity's most important holiday. A few years ago, I was in Jerusalem, and was blessed to sit by the place where he was supposedly buried at the Church of Holy Sepulcher.
Here is a brief note from Wiki: “Easter (Old English: Ēostre) is a Christian feast and holiday celebrating the resurrection of Jesus Christ on the third day after his crucifixion at Calvary as described in the New Testament.  Easter is preceded by Lent, a forty-day period of fasting, prayer, and penance. The last week of Lent is called Holy Week, and it contains Maundy Thursday, commemorating Maundy and the Last Supper, as well as Good Friday, commemorating the crucifixion and death of Jesus.
Easter is followed by a fifty-day period called Eastertide or the Easter Season, ending with Pentecost Sunday. The festival is referred to in English by a variety of different names including Easter Day, Easter Sunday, Resurrection Day and Resurrection Sunday.”
One thing the Muslims do at burial sites is to bless the soul of the deceased and wish peace to them.  I did my share and expressed my gratitude to God and Jesus for bringing the blessed message of love and forgiveness to humanity to create a better society for all of us to live.

As a Pluralist, I just want to make a point here, Jesus and his message belongs to the whole humanity, just as the message of all the spiritual masters including Buddha, Muhammad, Krishna and every one you can imagine, who was a blessing to humanity.  If we can purge the insecurity from our hearts, we would appreciate the contribution of each one of the great men and women, who committed to make the world a better place. For our own salvation and freedom, we need to remove the false perceptions about others. The choice is ours to believe in propaganda and hold on to anxieties; or find the truth and be free.
Many a Christians don white clothing symbolizing purification. It was what Jesus donned once and to this day the tradition is followed at Yardenit, where Jesus was baptized.  Indeed, I was dunked at the same baptismal spot in the river Jordan, a symbolic gesture of transformation and following Jesus. Thank God, the Baptist Minister agreed to customize the recitation for me, “in the name of God, and honoring Jesus, I baptize you today at this holy site.”  Indeed, two Imams were comfortable to follow the suit. I don’t know the history, but perhaps I may be the first Muslim to be baptized.  It was an enriching experience to me in particular, feeling the symbolic transformation.
More Baptismal pictures http://www.flickr.com/photos/mikeghouse/sets/72157626440675761/show/
What else, on the first day of the lent some 36 days ago, as a token of solidarity, I joined my Christian friends and gave up drinking soda to honor their practice.  I announced on Sean Hannity show (he is a Catholic) of my intention to observe lent, although I had forgotten and had Soda twice, I have made the effort to follow it as diligently as I can.
Jesus is my mentor, a true pluralist who had no barriers between him and humanity, as a Muslim I reiterate the affirmation of that thought; of being boundless.
Some of you may not be aware that Jesus is revered by Muslims, belief in him as a prophet is a requisition.  There is a full Chapter on Mary in the Quraan and Prophet Muhammad said there are three women who need to be looked up to as role models; Mary, Asia (the one who raised Moses) and Fatima (prophet’s daughter) and none of the women were traditional, they stood up against odds and changed the course of history.  The Hijab many Muslim women wear has origins in Mother Mary’s Hijab.
Years ago, my daughter, observed Lent, and we were glad she did, she got out of the addiction of Dr. Pepper, what a good thing it was!  People give up smoking and this period of 40 days is renewal in every sense, whether you are Christian or not, you can join in the process of reflection and purifying and being in tune with fellow beings.
Lent reminds me of 3o days of Muslim Ramadan; 7 days of Paryushan of Jains; 8 days of Jewish Passover; and 9 days of Hindu Navaratri. The essence of all these events is renewal of the soul and reflection on life.  I am happy that these actions are designed to make better humans out of us.
Every faith is composed of a set of unique rituals to bring discipline and peace to human life. Fasting is one of the key elements of observing Lent.
The spirit and intent of Lent lies in a human transformation in a forty days long inner spiritual journey of finding oneself in tune with spirituality.
Mike Ghouse is committed to building a Cohesive America and offers pluralistic solutions on issues of the day. He is a professional speaker, thinker and a writer on pluralism, politics, civic affairs, Islam, India, Israel, peace and justice. Mike is a frequent guest on Sean Hannity show on Fox TV, and a commentator on national radio networks, he writes weekly at Dallas Morning News and regularly at Huffington post, The Smirking Chimp and several other periodicals. www.TheGhousediary.com is Mike's daily blog.
Posted by Mike Ghouse at 11:09 PM