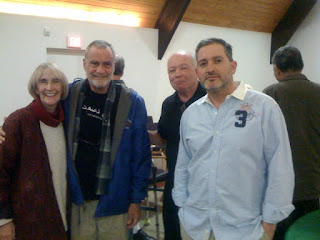 Rev. Ruggere's turned out to be a great myth buster. He pointed out how the media has projected, and the people have accepted in propagating the myth that the conflicts between Arabs and Jews is thousands of years old, it was not. It started around the beginning of the 20th century, prior to that they have lived together for centuries. They accuse that the Arabs want to drive Israel into ocean while suppressing their own rhetoric to drive Palestinians into the desert. Neither of them mean it.

One can criticize America and its policies to their hearts content but if a Senator or a Congressman utters one word against Israel - he or she will be hounded with Anti-Semitic rhetoric. Joshua was sharing the story, where the Palestinian families were kicked out of their own homes and while they were camping outside longing to be back in their homes, the drunken soldiers in the middle of the night come and harass the families. Josh camped out with them and hopes he will put the videos together.

I was saddened listening to this, and I hope the silent majority of Jewish people speak up, they truly want peace like all other people, but the men in charge of the policies have ulterior motives, and causing anguish and pain to the Jews of Israel and the Palestinians.

It is Jewish to be just and those who speak up are discounted by the powerful as self-hating Jews. We all need to know that power can carry you only for a short distance, but Justice can carry you the farthest. It is time for the majority to wake up and do the right thing; justice. Ten years ago, no one dared criticizing Israel, today it is becoming a common place; even the Media is getting some freedom to criticize the Israeli policies. Check the Blog - http://israel-palestine-dialogue.blogspot.com/

"Rev. Peter Ruggere, a Maryknoll priest, will join members of the North Texas delegation to the Gaza Freedom March to discuss their “feet on the ground” experiences with the politics and people of Palestine. Ruggere was assigned to the Catholic Charities program in Cairo, Palestine and North Africa from 1993-96, and afterward to the Maryknoll Justice & Peace Office in Washington D.C. from 1996-2002. He will make a PowerPoint presentation on “The Background to the Palestinian Question.” Members of the Gaza Freedom March delegation, Diane Baker, Roger Kallenberg and Josh Smith, will be just returning from their trip to Egypt where they and more than 1,300 internationals attempted to go into Gaza to support the people living under the Israeli blockade there. At First Community United Church of Christ, 9120 Ferguson Rd."