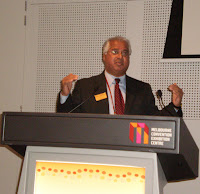 I want to thank the Memnosyne Foundation and the founder Mary Ann Thompson-Frenk for sponsoring my trip to the Parliament of Worlds Religions in Melbourne, Australia. I really appreciate it. It was an experience of life time.

Dr. Harbans Lal’s continuous encouragement and support was incredible, I am grateful to him to make the attendance meaningful and successful. I thank my friend Adil Khan for being persistent that I should go when I was debating otherwise due to time, school work and the work and other constraints. Yasmeen and my kids Jeff/Fern and Mina kept up with me while I was getting up at 6 AM and stayed until 11 PM daily at the conference center.

My gratitude goes to friends who nominated me for the prestigious Paul Carus award including Dr. Harbans Lal, Dr. Basheer Ahmed, Phyllis Curott, Imam Feisal, Rev. Angie Buchanan and Rev. Bill Matthews to carry out the work of building bridges. The encouragement from Eboo Patel, Sada Cumber and Mary Ann is appreciated as well. I have written updates on the Facebook as well as my random diary at http://theghousediary.blogspot.com/

I was one of the nominees for the award and fortunately, the award went to the most deserving to IAPA, "Interfaith Action for Peace in Africa," an organization formed in 2002 that brings together representatives from African Traditional Religions, Baha’is, Buddhists, Christians, Hindus, Muslims and Jews for their outstanding contributions to the Interreligious Movement by the Council for a Parliament of the World’s Religions.

"IFAPA," the acronym by which the award-winning group is best known, "models in a creative way, the peace-making potential of the growing interreligious movement," said Rev. Dr. William E. Lesher, Chair of the Council’s Board of Trustees. "The organization is comprehensive, representing the major religions of Africa and also geographically significant with a continent-wide reach and concern," he said. IFAPA’s most public activity has been in the area of conflict resolution, having sent interfaith delegations to Liberia, the Democratic Republic of the Congo, North and South Sudan and Togo over the last decade. Other IFAPA activities include a women’s project called, "A Mother’s Cry for a Healthy Africa," and a water project in rural Rwanda.

Tatiana Androsov was joined in by Rev. Bill Matthews and Mike Ghouse in placing Dallas for the 2014 Parliament venue. We had meetings with the Parliament executives to discuss about the viability of bringing the event to Dallas. We will be competing with Phoenix, Los Angeles, Bali, Istanbul and Bangkok. The program in Melbourne was borne by the Australian Government, The state of Victoria and the City of Melbourne. I feel positive about it, but we have to do the work and among several organizations in Dallas, we have the combined experience to put an event.

I am delighted that the Parliament gave ample time to the indigenous people from Americas, Africa, India, Indonesia, Australia, Fiji, Philippines, Japan and other areas. We needed to do that and am glad it happened, that really made me happy to acknowledge the ones, who were hitherto ignored by the society.

The theme of the parliament was “hearing each other and healing the earth” and the conference lived up to its theme by including every possible representation of humanity.