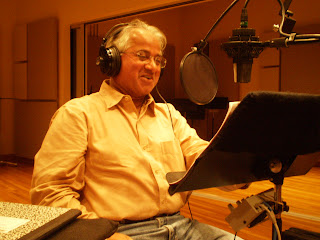 The National Public Radio invited Rev. Angie Buchanan, a trustee of the Parliament of the World's religions and Mike Ghouse as an individual to be on the air between 3-4 PM to talk about the Parliament event. It was a good interview and it will be available at http://www.wpr.org/hereonearth/ on Tuesday to download and listen to. Rev. Buchanan gave a wonderful analogy about religions being Islands and the need for the people in each Island to visit and build bridges.

I had a list of things I wanted to say, but due to the format of the interview, I just had to answer the questions they asked.

Here are my draft notes…. But the interview went little differently, all the things I wanted to say, could not be said. That is the nature of the Radio Talk Show. Please note I did not check for the grammar, it is simply my draft.

Mike - thank you so much for agreeing to be part of today's program! These are the questions I know I will have, but I also know that once the audience calls in, the conversation can go in many directions - Lori.

The Parliament was created in 1893 – Refer to the document

"The Parliament of Religions is undoubtedly the most noteworthy event of modern times. It has stirred the spirits, stimulated mental growth, and given direction to man's further evolution. It is by no means an agnostic movement, for it is carried on the wings of a religious faith and positive certainty." –Paul Carus, 1893

"IFAPA," the acronym by which the award-winning group is best known, "models in a creative way, the peace-making potential of the growing interreligious movement," said Rev. Dr. William E. Lesher, Chair of the Council’s Board of Trustees. "The organizations comprehensive, representing the major religions of Africa and also geographically significant with a continent-wide reach and concern," he said. IFAPA’s most public activity has been in the area of conflict resolution, having sent interfaith delegations to Liberia, the Democratic Republic of the Congo, North and South Sudan and Togo over the last decade. Other IFAPA activities include a women’s project called, "A Mother’s Cry for a Healthy Africa," and a water project in rural Rwanda.

2) Who attends…how are they chosen?

We invite individuals and communities who are equally invested in attaining the goal – Which was to cultivate harmony among the world's religious and spiritual communities and foster their engagement with the world and its guiding institutions in order to achieve a just, peaceful and sustainable world.

3) Where was the last Parliament before this one held, what were key themes, did they carry over to this Parliament?

Barcelona, Spain
The theme was same - to to cultivate harmony among the world's religious and spiritual communities and foster their engagement with the world and its guiding institutions in order to achieve a just, peaceful and sustainable world.

4) Themes of this Parliament

Hearing each other and healing the earth –

Giving the space to every human on this planet and hearing them out.

5) How was the city of Melbourne engaged in participating?

It is not only the City, the Australian Government, the State of
Victoria, the City of Melbourne, and the convention center.
The Governor, the Mayor, MP’s attended the event.

6) What is needed to set up interfaith dialogs?
What are some obstacles? How do you measure progress?

First let me talk about the origins of issue - The needs for the dialogue stems from the problems we have and identified with religion.

The problems of the world are ascribed to religion, The crusades, inquisition, missionizing, conversions, holocaust, genocides – Traditionally religion has been ascribed to all the destruction and death… including the 9/11 horror.

Religion is not the source of the Problem, and that is one of the reasons to dialogue.

The deliberate mistranslation of some 60 verses of Quraan to paint Muslims wrong for their own gains: – need to be known.

To be religious is to mitigate conflicts and nurture good will, and the purpose of religion is bring a social, psychological, spiritual and a moral balance to an individual and what surround him or her; life and matter.

7) How do you respond to the notion that “Yes, there are global problems and organized religion is one of them?”

In the United States roughly 1% of the population is in Jails, but the 99% is not, 1.5 Million traffic tickets are given each year, the 199.5 Million don’t get it. Are the law books wrong or the individuals?

Nuclear power lights up Melbourne, the same power in the hands of Bullies can annihilate Baghdad or Kabul and wipe out the civilizations.
Is the problem with New-Clear power or the individuals who abuse it?

When holy books are misinterpreted, is it the book or the individuals?
It is time we blame the wrong doers and not the Religion, blaming religion is escaping from finding the justice, where as finding the culprit individual can bring justice and find solutions.

Religions do not commit murder, bomb Iraq or the twin towers, individuals do and kill 3000 to a Million people.

8) President Carter was a guest speaker; members of the Obama administration were on hand, were other governments represented? How do you engage with government officials and what are they seeking from you?

It is our duty to keep law and order and faithfully guard the safety of every citizen. Hate is one of the many sources of disrupting the peace in a society and it is our responsibility to track down the source of such hate and work on mitigating it. We have an obligation to maintain a balance in the society. When we are at peace, we can generate peace and we can expect peace around us. Our words and actions should mitigate conflicts and nurture reconciliation and goodwill.

Ask not what the Parliament can do for you, instead, ask yourselves, what you can to to cultivate harmony among the world's religious and spiritual communities and foster their engagement with the world and its guiding institutions in order to achieve a just, peaceful and sustainable world.

Sister City programs, take the programs to every City

The international Summit on indigenous people is coming up in 2010

Programs like "experience the religion" will be initiated in February 2010, comprising ten workshops on the 3rd Sunday of every month

We have to find balance for the society, when others safety is considered, our own safety is guaranteed.

10) How can others become involved?