Prophet Muhammad was an ultimate peacemaker,  and the essence of his work was creating societies of harmony, kindness, peace and Justice, which are indeed expressions of Tauheed; the oneness of the created and the creator with the intentional diversity in all his creation.

While an over whelming majority of Muslims appreciate his message and celebrate his birth, a few among us choose not to,  and that is fine with most of us. However, the problem comes when a handful of Muslims want to impose their ideas on others and even call it sinful, instead of expressing disagreement. They forget the primary teachings of Islam, that there is no compulsion in the matters of faith,  that no one bears the burden of others, and that no one is accountable for others actions.

We invite every one to join us in appreciating the two men who were dedicated to creating peace on earth.

Here is my personal story of admiration for the prophet.

Each year, between January 30th and April 4th the peace centers around the nation celebrate the time period as a season of peace.  Talks are arranged on the works of Mahatma Gandhi and Martin Luther King, Jr. I wondered what about Prophet Muhammad? Why is no one is talking about his work for creating harmonious societies?

About a decade ago, as a board member of the Dallas Peace Center, I proposed a topic to be added, “Muhammad the peace maker” – it flipped many including Muslims, they have never heard of him as the peace maker.

It was a big responsibility to shoulder and to communicate that Prophet Muhammad was indeed the peace maker.  I studied many books written by non-Muslims, and the book that influenced me most was “Muhammad” by Karen Armstrong. There, I saw prophet as a human like you and I, with whom I could relate. The essence of his work was creating societies of harmony, kindness, peace and Justice, which is a descriptor of Tauheed; oneness of the created and the creator with the intentional diversity in all his creation.

I took 15 of Prophet’s many examples that we cite daily in our mosques and schools and wanted to go deeper into the narratives, and what I found was a formula embedded in all his work, and every time,  “Conflict mitigation and goodwill nurturence.”  Perhaps for the first time, my fellow Americans saw his contribution towards building peaceful societies, and they were pleasantly surprised and chose to hold the prophet in high esteem.

People always relate with something they already know.  They knew Gandhi and MLK and their work, and when they hear about Prophet Muhammad in the same context, they add him as a peace maker in their repertoire.

We have experimented in communications – for example, I have written over 250 articles in Dallas Morning News on Pluralism, and about 125 in Huffington post. Each article shares the beauty of many faiths, when people see something good of their own faith in the article, they appreciate it, and they accept a quip or a quote of the prophet in good spirit and perhaps narrate it to others with joy.

How many times have you found yourselves gloating when a non-Muslim speaks good things about Islam? When the President, or a congressman says As-Salaamu Aliakum perfectly, our attitudes instantly change, we give back Wa-alaikum as-salaam enthusiastically.   They are no different, they are people like us, if I were to tell them about the Prophet, the chances of them believing are limited, particularly those with polarized mindsets, but if I tell them about Jesus, Moses, Krishna, Buddha, Mahavir,  Bahaullah, Nanank, and many others, they cherish it,  they gloat, and start seeing Muhammad as the peace maker.


Prophet Muhammad is indeed a mercy to mankind, nay, mercy to the whole universe – i.e., life and matter.  As Muslims we should proudly share his ideals with fellow humans.  After all he was a Rahmat (kind) to the universe, and we should be Rahmat to fellow beings in his footsteps.

Prophet did not travel in the airplane, nor did he use the computers. He did not eat Biryani or drove a fancy car or lived in an Air-conditioned house, but he said one of the most profound things – a good deed is something you do to benefit humanity, knowing full well that you are not the beneficiary. He said, it is like planting a tree knowing well that by the time it grows to give fruit and shade, you are not the beneficiary, someone else in the Aalameen (Universe) is.


In response to criticism of holding the “Season of Peace event” Dr. Aquilur Rahman, Chairperson of American Muslim Institution said it perfectly, “However, the main thrust here is to interact with non-Muslims as often as possible to minimize the bigotry and hatred against Muslims. In the last ten years the Islamophobia has gone to the peak and Muslims have no way to counter it.”  He asks, “Do we have any way to challenge them either on the stage or otherwise?" He sums it up, “Having acute lack of resources to run big ads,  the only viable way is to increase the understandings with other faith people and establish an enduring relationship to live cohesively and in harmony with each other." 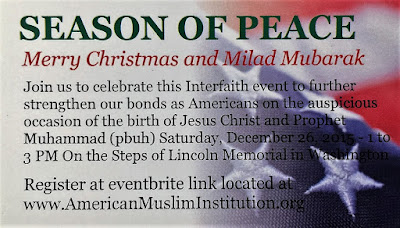 Here is a God-given opportunity to further strengthen our bonds with fellow Americans on the auspicious occasion of the birth of Jesus Christ and Prophet Muhammad on 25th and 24th of December, respectively.  You and I are not the beneficiaries of this joint celebrations, but we have to be unselfish and think about the future of our kids, and kids of fellow Americans who are not Muslims. Our kids (all kids) should be the beneficiaries of living a life of accepting and respecting each other. Our acts are indeed an emulation of Prophet’s work – it seeds peace and security for generations to come.
Please click the link to register for the event, it is free:

God bless America, and God bless us all.

1. How I Connect With Prophet Muhammad - http://www.huffingtonpost.com/mike-ghouse/how-i-connect-with-prophet-muhammad_b_2547782.html

Dr. Mike Ghouse is a community consultant, social scientist, thinker, writer, news maker, and a speaker on Pluralism, Interfaith, Islam, politics, human rights, India, Israel-Palestine Terrorism and foreign policy. Over 3000 Articles have been published on the subjects. He is committed to building cohesive societies and offers pluralistic solutions on issues of the day. More about him in 63 links at www.MikeGhouse.net and bulk of his writings are at TheGhousediary.com
Posted by Mike Ghouse at 6:19 AM