Goodbye to Dallas, and why am I (Mike Ghouse) moving to Washington D.C.,

When I complete this, I will take off this sentence.
Sunday, July 13, 2015 - As I was driving off with my U-Haul truck all packed up,  I could not resist going back to the office one more time. I lodged myself on the furniture I had left, and looked through the window, so many memories were coming alive! I thanked the unknown for being good to me thru good and bad times and prayed in peace and joy, and left the place with a heavy heart.
What brought me to Dallas? It was my friend Everett Blauvelt! Who is a father figure to me. He meant much to me and sadly passed away at 97 a few years ago, other than him, the only person I have known the longest in the US is my sister -his daughter Mary for nearly 38 years along with Lili and Becky for 35 years each. Lili picked me up from the Airport on the day and she was a gracious host – I ate almost all the Vietnamese foods I can, I remember walking Becky to the spring ridge elementary school in Richardson and years later I walked my own son Jeff and daughter Mina to the same school. 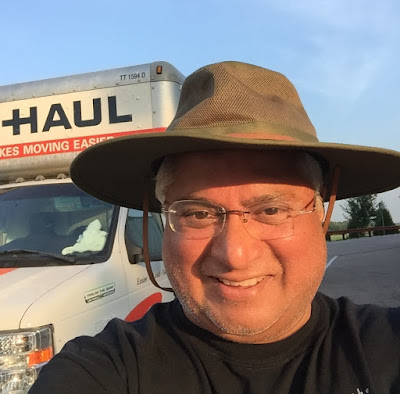 While I passed thru I-30 by the Fair Park, I saw the building I worked, it was my first job with Lewis Fire Equipment – DW Lewis was my boss, a great guy. It is people like him that make people love Americans. I have learned so much from him. Delores, Inga, David, Earl, Tim, Gary were all a good group of people.

I enjoyed working with these men and women, and they have become my favorite bossess in Dallas. They are Mar'sue Haffner, Kathy Joplin, Mike Davis, Mark Ferguson, Bob Hafer and Jim Jenne.


Made several friends at University of Dallas, my Alma-Mater, and now realize that there are a whole lot of more people I know who are from the same school, off hand its Ashraf Hemani, John Hammond, Satish Gupta and several others.

Some of the Desi friends I know the longest are; Vinod,  Mathur, Shabnam and OS Modgil, Maliha and Nadir, Talib's family, Shiraz, Adil and Nosheen Khan, Vina and Ghanshyam Dave... Mary Ann and Josh,  it is quite a long list... I just realized that I have too many good friends in Dallas. I won't be able to write all the names but I have them all on my phone - 2800 of them!
The best time of my life was spent here between family, friends and the communities. Met my first wife Ella and we have two great kids, Jeff and Mina, Jeff is married to Fern and they have a baby Jayden who is two now. Mina is getting married next week to Chris. Najma was my 2nd wife, and we did a lot of things together and finally she did not survive the Cancer. I am now married to Yasmeen, a great woman to live with.

Dallas has been a blessing to me - over the years I have developed relationships with people from Atheists to Zoroastrians and every one in between. Indeed, I have been to almost all the places of worship and it has been a good relationship with people of all faiths and no faiths. Indeed, its over 45,000 people on my list in every grouping you can imagine.  I love people and feel good when I connect with them.

While driving out of Dallas - I was literally seeing the movie of myself, repeating from something I saw in a movie called Defending your life with Albert Brooks and Meryl Streep; I might want to see that movie again. You might consider it too… Any way, it was nearly 18 hours of drive and was able to go back to much of my life in Dallas, a great life experiencing every aspect of it; khatta, meetha, Khara, sada,  pheeka, teekha aur kadwa,
I have a dream, that one day in our life time; you and I will wake up to a cohesive world, where no human has to live in tension, apprehension or fear of the other. Indeed, that was the dream of all the spiritual masters of the world, and that is what the creator wants – all pieces of his creation to function together smoothly.
That balance is lost when greed, fear and arrogance takes us over. To restore that harmony, all of us have to do our share of the work. If we can learn to respect the otherness of others and accept the God given uniqueness of each one of the 7 billion of us, then conflicts fade and solutions emerge.
God willing, I will put together programs, seminars and workshops for my fellow Americans, Presidential Candidates, Senators, Congresspersons, Lawmakers, and the people in public life to learn to respect the otherness of others (Pluralism), America has come a long way in fulfilling the vision our founding fathers, that all men are equal, and we have a few more miles to go to live and let others live.
More about it at - https://plus.google.com/108969690090944956820/about
Thank you for all the wishes and nostalgic notes and comments you have showered on me, It was nice… I stopped several times during my trip and acknowledged each comment. I reached Louisville at Midnight on July 13, 2015, Yasmeen and I will go to Atlanta on Wednesday and from there I will fly to Washington, D.C.on Monday, July 20
I have been planning to move to Washington, D.C. for the last four years. Finally the time has come.
Thanks for all the support you have given me.