Mahatma Gandhi was shot on this day on January 30 in 1948. He was determined to seek freedom for India from the mighty Great Britain, and he got it without the war and without bloodshed. His was one of the greatest successful experiments in non-violence.  I hope President Obama follows him, we don’t need the senseless wars with any one, the best way to eliminate the enemy is to make friends with him, and it is the smartest thing to do. 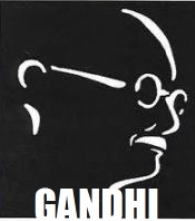 Can you imagine the power he had? He shook the empire, they could have easily killed or poisoned him, but they did not have the guts to do that. What made Gandhi, Mandela, and MLK successful?

None of them had anything to gain, all they wanted was justice and harmony in the society, and that was their drive, when you become unselfish, you can do a lot of good to the world. I am inspired and driven by him. Twice in my dreams, he has appeared and patted on my back and said, son you got a lot of work to do. Indeed, I do, we all need to do our share of work in making the world a better place, at least around us. It begins with learning the respect the otherness of other and accepting the God given uniqueness to each one of us, if we do that, conflicts fade and solutions emerge.

The frightened ones (right wing) in India did not like Gandhi’s dialogue approach to conflicts, they wanted bloodshed and mayhem, the animalistic way of resolving disputes, Gandhi pushed dialogue, the human way to finding solutions to conflict.

I salute this great Soul and thank God for blessing the world with this prophet of non-violence!  God bless him! Amen