A tribute to Benazir Bhutto on the 5th death Anniversary

Mike's Speech at the 5th Anniversary commemoration by Pakistan People's party in Dallas, as an Indian. http://worldmuslimcongress.blogspot.com/2012/12/a-tribute-to-benazir-bhutto-on-her-5th.html

As you commemorate the 5th anniversary of Benazir’s death, in effect, a blow to democracy, I offer my heartfelt condolences to Pakistan and her people.

Benazir fulfilled the aspirations of Muslims around the world. She became the first Muslim woman elected to lead a Muslim state; Pakistan. The year 1988 remains a historical event in Islamic history.

Ever since Prophet Muhammad declared that men and women are each other’s partners, each others garments, each others protectors, each others respect, it gave a lot of hopes to women. Indeed, he liberated women from the shackles of slavery and chattel hood.

He went on to say that she had the freedom to worship the creator as the man does, she can even disobey her husband when it comes to faith. Women’s liberation took root then, but it died down after his death. 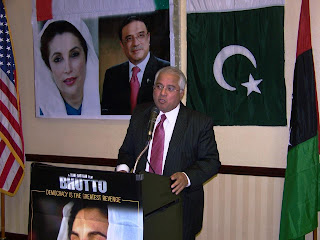 Even though the Prophet said to treat your women right, it was not obeyed by many. For that matter how many people in their religion follow Jesus, Moses, Krishna or Buddha? He wanted the governance of people by their elected representative and not a monarch or a dictator. The first 30 years after his death remained democratic, elected Caliphs, though not through a ballot but was with majority consensus. But that vision was shot by Yazid, the brutal monarch who usurped the power and declared himself the king with absolute powers, just like President Morsi did in Egypt.

Turkey became the first Muslim Democratic nation in the world after a gap of nearly 13 centuries; the next Muslim democracy was Pakistan in 1947. Qaid-e-Azam Jinnah’s vision was ahead of his time in the contemporary world. Although he was envisioning a pluralistic democracy for Pakistan, he must have been influenced by Prophet Muhammad’s Madinah treaty, where the Jews, Christians and others lived their faith and had the freedom to speak, worship and assemble.

Benazir gave hopes to Muslim women by becoming the first Muslim woman leader in 13 centuries, and paved the way for those women who aspired to become the Aisha’s and Fatima’s to lead their communities.

She opened the door for Muslim women leaders in Bangladesh and Indonesia to become the 2nd and 3rd heads of the states. As a single Muslim woman she met with the Muslim heads of the states and they did not flip over that, she set the new standards and established the acceptance of woman leadership in Muslim states, no Muslim nation would have allowed that, Pakistan did, while we don't even have one in the United States yet.

Had she lived, she would have rubbed off that influence on the Muslim Monarchs around the world to go back to the beautiful civil 7th Century Arabia, where women were equal partners in life and not chattels. With her untimely death, that dream for Muslim women in Pakistan is shattered, but not gone. Some one will pick up the mantle and I hope these events highlight the courage of women.

Of course nothing comes without sacrifice. You may not agree with the politics of Benazir, but agree and acknowledge her sacrifices, including but not limited to enduring humility and disgusting conditions of living in the wretched jails - because she believed in Democracy for the people of Pakistan.

As an Indian and as a Muslim, it was my hope to see a democratic pluralistic Pakistan, with least conflicts between the two nations just like Canada and the United States. Politically the Indian Muslims differ with the Pakistani Muslims on the issue of Kashmir. The Indian Muslims do not want another division based on religion, but the Pakistani Muslims claim their right to Kashmir. We believe differently and we will leave it at that. When Democracy takes firm footing in Pakistan, most of the issues will heal away. In Democracy there are no personal gains in redrawing the state lines.

Benazir gave a lot of hope to everyone; women in particular, there was a hope that she would uplift the women back to the freedom that was prevalent during the times of the prophet, the man who was Rahmatul Aalameen (Mercy to mankind) to women and the minorities.


A nation is judged by how it treats her weak, voiceless, women, children and the minorities. Both our nations have to rise above. In India we need to bring closure to the Babri Masjid issue, the Sikh Genocide, the Gujarat Massacre, Discrimination against Dalits, the exodus of Kashmiri Pundits, Old wounds from Aurangzeb rule, Unfair Quota system, harassment of Christians and other minorities. They are not going to go away without a heart to heart dialogue.

Pakistan has severe problems in this area, the absence of rule of law causes fear among her people. The harassment of Hindus, abduction of Hindu women destruction of their places of worship, blatant violation of rights of Ahmadiyya, Shia and Christians go unabated and this will tear the country further apart. The first responsibility of any nation is to protect its unprotected. Right now, it appears no one in the governemt wants to do anything.


As an Indian American, I just want to assure you that a majority of Indians want to see a prosperous peaceful democracy in Pakistan, just like a majority of Pakistanis want goodness for India.

Patriotism is not dying for the country, or making an enemy out of neighbors, it is rather upliftment of the own and wishing well for the neighbors. A stable democratic Pakistan is good for the Pakistanis and good for Indians.

I hope that Benazir’s death will become symbolic in keeping the flame of democracy alive and hope she continues to inspire Muslim women around the world. Events like this help. The women who were barred from driving cars in Saudi need a Benazir, the Malalas need a Benazir so women can get their education and produce a better society.

I am here to pay my khiraj--e-akheedat (a reverent tribute) to Mohtararama Benazir Bhutto.


Pakistan Paindabad.
Mike Ghouse committed to building cohesive societies and offers pluralistic solutions on issues of the day. Mike is an Indian American Muslim. His information is at www.MikeGhouse.net
Posted by Mike Ghouse at 12:17 AM