I have not attended the Nowruz festivity in a while, but it is fresh on my mind. My Zoroastrian friends had a gathering and it was a pleasure to be a part of the festivity… fruits and veggies, sort of Jewish Purim festival.

Way back in 1996,  I had a weekly radio show on Saturdays called "Festivals of the world", where in we shared the essence of every festival occurred during that week. When we announced about it for the first time on the radio, assuming it was a Zoroastrian Festival; our Baha'i, Ismaili and Iranian friends called in and said, it was theirs too. Well Happy Nowruz to all!
Zoroastrian faith has been in my domain since I was about ten, my mothers close friend was a Parsee lady (Zoroastrian) Mrs. Bahramjee, we affectionately called Parsee Amma ( In Bangalore, we have a habit of tagging Amma to every senior lady) she came to visit my mother on Tuesdays and they talked for several hours…God only knows what. My first encounter with Baha'i was with Ben and Simi Moghaddas in 1993, they were on my Radio Show to talk about Bahai faith and my first Iranian contact was when I was in college- they came to Bangalore Medical College and Bangalore Agriculture College from Iran. 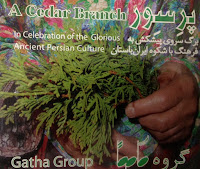 I could not find my piece on the festivity…but I found my CD I bought from the stall at Nowruz… it's in Persian, I can read it, and understand a few words… but the songs and music is fabulous. Somewhere I have a CD in Avesta language as well... the gentleman is in Californian and he and I have the same  voice. Even I was taken back listening to him, it is a rare voice.

Here is the story:
Nowruz marks the first day of spring and the beginning of the year in Iranian calendar. It is celebrated on the day of the astronomical vernal equinox, which usually occurs on March 21 or the previous/following day depending on where it is observed. As well as being a Zoroastrian holiday and having significance amongst the Zoroastrian ancestors of modern Iranians, the same time is celebrated in parts of the South Asian sub-continent as the new year. The moment the Sun crosses the celestial equator and equalizes night and day is calculated exactly every year and Iranian families gather together to observe the rituals.
Originally being a Zoroastrian festival, and the holiest of them all, Nowruz is believed to have been invented by Zoroaster himself, although there is no clear date of origin Since the Achaemenid era the official year has begun with the New Day when the Sun leaves the zodiac of Pisces and enters the zodiacal sign of Aries, signifying the Spring Equinox.
The Jewish festival of Purim is probably adopted from the Persian New Year. It is also a holy day for Sufis, Ismailis, Alawites, Alevis, and adherents of the Bahá'í Faith.
The term Nowruz in writing, first appeared in Persian records in the 2nd century AD, but it was also an important day during the time of the Achaemenids c. 548-330 BC), where kings from different nations under the Persian empire used to bring gifts to the Emperor, also called King of Kings (Shahanshah), of Persia on Nowruz. The significance of Nowruz in the Achaemenid empire was such that the great Persian king Cambyses II's appointment as the king of Babylon was legitimized only after his participation in the New Year festival (Nowruz).
Happy Nowruz


http://wisdomofreligion.blogspot.com/2012/03/happy-nowruz.html
- - - - -
MikeGhouse is committed to building a Cohesive America and offers pluralistic solutions on issues of the day. He is a professional speaker, thinker and a writer onpluralism, politics, civic affairs, Islam, India, Israel, peace and justice. Mike is a frequent guest on Sean Hannity show on Fox TV, and a commentator on national radio networks, he writes weekly at Dallas Morning News and regularly atHuffington post, The Smirking Chimp and several other periodicals. His daily blog iswww.TheGhousediary.com
Posted by Mike Ghouse at 11:02 PM