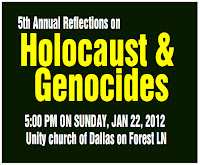 This is one of the most difficult programs I have organized and endured. Thank God, I have been able to survive the scathing remarks, biased attitudes, outright belligerence, threats and boycotts for five years.

Why should anyone stand up for you, if you are not willing to do the same for others?
Indeed, the bias and prejudice is limited to a handful of people among Muslims, Jews, Christians, Hindus, Buddhists and others with no exception. A few in each group have said to me in my face, if you are not going to talk about the plight of Palestinians, you are not a Muslim,  a few Jewish friends have said, if you talk about Gaza, you are anti-Israel and will not attend the program. My Hindus friends were stuck with Kashmiri Pundits issue, the African Americans talked about the plight of  millions of captured men and women thrown in the Atlantic with rocks tied to their feet, and of course our Native Americans friends have endured endless humiliation, suffeing and annhilation....
Thank God, many of them attended the progams, not to understand but to report and gossip, but  I thank God again that they saw that Justice has got to be blind and each one of us need to look at the ruthelessness within. Blame no one, but reflect on our own nature and do what we can do as indviduals to prevent these attrocities from happening.  I am glad they walked out with a committment to be less biased, less prejudiced and willing to stand up for the others.

As a group together participating in a dialouge,  we have talked, mentioned and shared about more atrocities than an averege person can list, I mean the average you and not the Human rights activists. Here are a few of the many graphic pictures we have shown in our programs. If you have a weak heart, do not watch it, they are too difficult, but imagine the folks who lived through this hell. Please pay homage to them and their suffering by spending two hours a year and accepting our share of  individual responsibly to work and to mean the famous Jewish phrase, "Never Again".  http://www.flickr.com/photos/mikeghouse/sets/72157622461372216/show/

If we have not shared a picture or a representation of a genocide, it is simply because we are not aware of it, it is humanly impossibe for any, including you to list every attrocity out there. So please take the resonsiblity to share the pictures of genocides so we can add.  Thank you.
We can bring small changes, if we value the lives of other groups as our own. There is not a religion that has not taught one to treat others as you would want to be treated. Not one and it is called the Golden rule.

The overriding desire to highlight our own suffering blinds us from other’s suffering.
Other people’s suffering is as legitimate as ours; when we strip the politics out of a conflict, we see hope; we can value others suffering without lessening our own;
My usual response is, are you serious about it?  If you are, I invite you to be a part of the commemoration to talk about it.  If we miss mentioning the name of a massacre or genocide, it is because folks like you do not speak up or shows up to witness other people’s suffering.

You and I owe to those who stood up for us, or stood up for someone up our line.  The only way to pay our debt is to stand up for others. It is worth your time to pay homage to millions who were killed for no other reason than they were humans like you and I who did not harm anyone.

If you are in blame mood think about finding a solution. Is it likely that the oppressors and criminals erroneously blamed the individuals or group before they slaughtered them? It is this attitude that we need to purge from our hearts and minds, if we expect others to be free from prejudice and stereo typing, we need to make sure we are clean.

A sense of responsibility for creating a better world gets awakened; ultimately co-existence and every one's safety and peace should be the driving thought.

We invite sponsors, facilitators, speakers, writers and volunteers from individuals and organizations to make this happen. It is an initiative of American Muslims striving to build responsible civic societies, where justice and co-existence are our values.


Please join us for the 5th Annual Commemoration on Sunday,  January 22 between 5 and 7 PM at Unity Church of Dallas on Forest Lane.