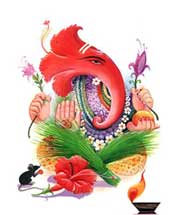 Among Hindus there is beautiful tradition of invoking that aspect of God which removes barriers and paves the way for a smoother life. The icon that represents this aspect of God is known as Ganesh, Ganesha, or Vinayak depending on the region, most Hindus around the world invoke Ganesh before they start any thing in life from starting their day, to opening a new business or wearing new clothes or starting a social ceremony.

I see the essence in a ritual, rather than the ritual itself. The act of invoking the creator sets oneself on a positive path. One starts out with a good feeling that God is with him or her and will remove the barriers for him. That is the power of positive thinking that Napoleon Hill has talked about; it is psyching oneself up to do the right thing and succeed.


Every faith finds value in rituals, indeed the rituals are pathways to spiritual attainment. From the moment we are born to the last rites of our life and every moment in between is loaded with rituals whether we admit or not. Whether we go to the gym, eat our food; go to sleep, wake up, wear our clothes, drive some place or in our intimate moments; we follow rituals.


The great Hindu sage Sri Ramakrishna shares this, "There can be as many spiritual paths as there are spiritual aspirants, and as many Gods as there are devotees." One of the hallmarks of Hindu spirituality is the worship of this infinite diversity of the One Unknowable God in a multiplicity of forms. To this I am pleased to add that as beauty is in the eyes of the beholder, faith is in the heart of the believer.


Ganesh Chaturthi is a ten day festival commencing on August 23rd and ending on September 3rd Every evening people gather around the Icon of Ganesh made out of clay and celebrate it with devotion, entertainment and community gatherings.

I grew up in Yelahanka my mother town, a suburb of Bangalore. Every year the Ganesha Chaturthi was celebrated for nearly ten days. A huge tent was set up on the main street across my home, and big clay Icon of Ganesha was placed in the tent. For ten nights different music bands came and sang the most popular Kannada and Bollywood songs, or a learned Hindu scholar would share the wisdom of Hinduism known as Hari Katha. I remember a Hari Krishn Pahwal, the Qawwali singer from North India who would sing Qawwali in Urdu in praise of Ganesh at least one of the 9 nights. It was quite a treat for us kids.

On the tenth day, the Ganesh Icon is carried on a chariot with pomp and gaiety to the lake and immersed in the water to dissolve.

On the culinary side it was a delightful time, as kids we looked forward to it every year. We visited many homes in that month; particularly my father’s buddy Bellur Muniyappa’s home. They fixed the “obbattu” the pancake like item with sweet and sour soup called “saaru” and the “Kanola’s” the dumpling made out of Jaggery, coconut and flour. I fondly remember my Grandmother making delicious Obbattu, Saar and Kanola’s. Heck, I long for it.

Ganesh Chaturthi has its origins at the beginning of Sanatana Dharma, usually known as Hinduism. However, the festival took its present form in 1893 when Lokmanya Tilak, the Hindu Social reformer initiated it.


Tilak wanted to build bridges between different Hindu communities and saw the commonality of worshiping Ganesh among different sects. “Tilak recognized the wide appeal of the deity Ganesh as "the god for everybody", and popularized Ganesh Chaturthi as a national festival in order "to bridge the gap between Brahmins and 'non-Brahmins' and find a context in which to build a new grassroots unity between them", and generate nationalistic fervor among people in Maharashtra against the British colonial rule”.


Tilak encouraged installation of large public images of Ganesh in pavilions, and also established the practice of submerging in rivers, sea, or other pools of water all public images of the deity on the tenth day after Ganesh Chaturthi.


Under Tilak's encouragement, the festival facilitated community participation and involvement in the form of intellectual discourses, poetry recitals, performances of plays, musical concerts, and folk dances. It served as a meeting ground for people of all castes and communities in times when, in order to exercise control over the population, the British Rule discouraged social and political gatherings.

If you are in Dallas, please attend the UnityDay USA – details at http://www.unitydayusa.com/ on Sunday, September 11, 2011

Mike Ghouse is committed to building cohesive societies and offers pluralistic solutions on issues of the day to the media and the public. He is a speaker thinker and a writer on the topics of pluralism, cohesive societies, Islam, interfaith, India and Peace. He is available to speak at your place of worship, work, school, college, seminars and conferences. . Mike's work is reflected in 4 website's and 27 Blogs indexed at http://www.mikeghouse.net/ and you can find this article at www.TheGhousediary.com
Posted by Mike Ghouse at 2:10 PM