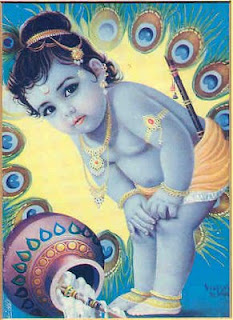 Celebration of Sri Krishna's birthday, the man who gave us so much wisdom in Bhagvad Gita. The book is an encapsulation of his advise to Arjuna when he goes through different phases of thoughts and actions. ...It is one of the best self analysis books to read.

One of my best inspirations comes from Bhagvad Gita, the following verse or shloka turned my life around " finding the truth is one's own responsibility" and all my work on Religion and Pluralism emantes from that. It is a very powerful statement.

The other Sholoka Sri DD Maini shares with me frequently is - do your work, and don't look for the fruit.. Indeed, you may want to think about the meaning in it. When you set out to do some good, don't fail yourselves with negative thoughts, if you fail yourselves why should any one want you to succeed? Let the invisible creator make that call. You just do it.

When I was a baby, I was dressed up as Krishna (baby) as on in the picture on the left, and a matka (vessel made of clay) with Makhan (butter) was placed infront me and apparently I did just like Sri Krishna did with the Makhan... my pictures were in many homes...I have to go find them... after 57 years!

I grew up with all the beautiful traditions of Hindus, Muslims, Christians, Jains and Zoroastrians in my town, never thinking it was their festival or ours, festival is every one's way of being with friends and family. My Dad was the Mayor the town of Yelahanka, a suburb of Bangalore. In fact my home is the home of Bangalore's founder - Kempe Gowda. When I was born, I was circulating in every one's hands in the town. I was donned as Bala (kid) Krishna and my pictures were in all his friends homes. I ask my brothers and sister to reach out to families of Gopal Gowda, Ramaswamy, Shankrappa and Bellur Muniyappa, they have the pictures of me as Krishna when I was a toddler. Those folks are all gone but their kids are still around.

When Najma and I were in Brindavan to visit the birth place of Sri Krishna, it was very inspiring to think about the man who changed so many lives, and I was privileged to see that place where he was born. Krishna is one my mentors and inspiration in life and hope to learn a lot from reading about him. Indeed, one of the best teachers in Bhagvad Gita is Swami Nityananda Prabhu at the Hare Krishna Temple in Dallas. He and I have spent over 100 hours talking about Hinduism and Bhagvad Gita on my Radio talk show "wisdom of religion, all the beautiful religions"He shares the Pluralistic vision of Sri Krishna.

We bought several song tapes out in Brindavan, ... . I was frustrated as I could not find the song by Rafi and Lata... Sonu had made so many copies of it that Rafi's original version had become rare. Finally we found it in a remote store and enjoy it very much.

# #
Sri Krishna is one of my mentors along with Prophet Muhammad, Gandhi, MLK, Jesus and a few others. These souls were committed to peace and co-existence, they wanted nothing but goodness for human beings.

I have quite extensively written about vasudeva Kutumbakam , it is the ultimate essence of all faiths. The idea of one God or oneness of God is another expression of Vasudava Kutumbakam - the whole world is one family....

Quraan mentions that God has sent 124,000 messengers to the world - meaning God did not leave out any one, 124000 is number to indicate reaching out to every one. God has not excluded any group. Sri Krishna says, whereever unrighteousness emerges, I will emerge and bring the righteousness (dharma) back. Both mean bringing sanity to people when they are not - most people get that messages and few don't.

108 NAMES OR EXPRESSIONS OF THE NAME KRISHNA