Obama deserves full credit, he has right to claim credit 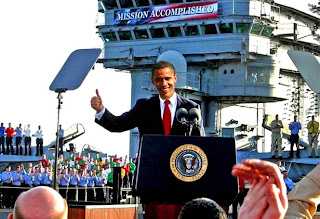 The superfluous claim by a few in behalf of seals that they should have gotten the credit is baseless. Had the operation gone wrong, it would have been Obama's 2nd term on line, remember Carter?
Republicans should shut up and back off, before the disgusting videos of Willie Horton against Dukakis, and fake videos against John Kerry appear on the horizon and embarrass the double speak.

If Mitt Romney were President, under the influence of erratic Republicans, he would have carpet bombed Abbotabad and the entire region,  he would have had American thousand of American soldiers killed and hundreds of thousands of Pakistani soldiers, with huge collateral damage. Bush destroyed them, destroyed our economy causing foreclosures and job losses and three trillion dollars. His war on the wrong people, got thousands of American soldiers and hundreds of thousands of Afghans and Iraqis.


Bin Laden was the target. Obama got him without collateral damage unlike Bush. I'd rather Romney be like Obama than Bush. If he were Obama like, then Obama is good enough for another term.


Obama has every right to use the killing of Bin Laden to his credit. Remember Bush Mission accomplished?


I am a Republican, a moderate one, and will not want to put up with our party resorting to falsities.

We the Republicans need to earn votes by doing good to America and fellow Americans and not attacking the President, we will lose, we cannot fool the American Public.

MikeGhouse is committed to building a Cohesive America and offers pluralistic solutions on issues of the day. He is a professional speaker, thinker and a writer on pluralism, politics, civic affairs, Islam, India, Israel, peace and justice. Mike is a frequent guest on Sean Hannity show on Fox TV, and a commentator on national radio networks, he contributes weekly Texas Faith column at Dallas Morning News and regularly at Huffington post, and several other periodicals. www.TheGhousediary.com is his daily blog.
Posted by Mike Ghouse at 10:19 PM