Muslim Ceremony in a Synagogue 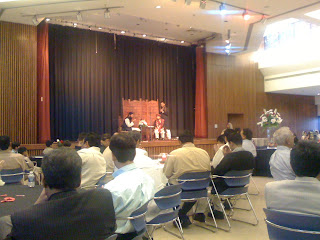 This evening I attended the "Ameen" ceremony; a celebration when a Muslim boy or a girl completes reading the Quraan for the first time. The event was held in cultrual center of a Synagogue. I loved this harmony. We need more of these every where in all combinations. Aftab and Farzina's son Zain, Friends of Yasmeen in Louisville, KY.

Uzma Hashmi Its a heartfelt event for all of us. Congratulations to Zain's parents.

Rehana Matri Qur'an says that houses of worship are for Allah alone. So jewish people believe as muslim people believe, that there is only one God. And jewish people were given the book of Moses before this. So it is indeed a wonderful thing to know that an event like this has been celebrated in the cultural center of a synagogue.

Carol Covington Mason Unification of and respect for all religions under one God.

Carol Covington Mason I am with you all the way, Mike!

Rosanne Dourado great news Mike - it's time for something like this. I'm curious though - Islamic thought accepts that Jews, Christians and Muslims all believe in the same God. Would this ceremony ever be allowed to take place in the cultural centre of a n...on-Abrahamic religious place for example, a mandir, gurdwahra, vihara or Baha'i building?

Mike Ghouse Rosanne, I don't see why it cannot be done.

However, sensitivity needs to be applied. In case of a Jain or a Hindu Temple, meat dishes cannot be served, if it is all veggie, then I suppose it should be ok. In case of Jewish or Muslim plac...e of worship, an Icon representing God is not kosher; it may be the case with other traditions.

However there are rare incidents of denial. Some 15 years ago, in Lisbon, Portugal a Catholic priest gave the key to a Hindu couple for their Weddings, and the priest was fired on that - as the Hindu couple placed a Ganesh icon at the altar as they normally do. I took up the protest as both parties had assumed wedding as they do normally without realizing the difference. I got quite a few threatening calls from the members of diocese in California for standing up for the Hindu wedding.

I was able to set up interfaith prayers in a Mosque in Dallas, where all religious leaders chanted their sacred hymns, one or two guys jumped on me but backed off. If the majority speaks up, good things will happen.
Posted by Mike Ghouse at 4:48 PM

Email ThisBlogThis!Share to TwitterShare to FacebookShare to Pinterest
Labels: mike.Ghouse.Pluralist